MSW launched at last! Guitar wave marks the sound of an era!

A wave of guitars has been unveiled on the banks of the Mersey to mark 50 years of Merseybeat music, a sound made famous by The Beatles.

100 donated guitars were hung at the Beatles Story to symbolise a wave of music by Liverpool artist and musician, Bill Hart, in the impressive Mersey Ferry terminal building, which is also home to the Beatles Story.

McCartney’s iconic Hoffner base guitar, which he used for much of his Beatles career, stood impressively at the centre of the guitar collection, with the River Mersey as a fitting back drop. 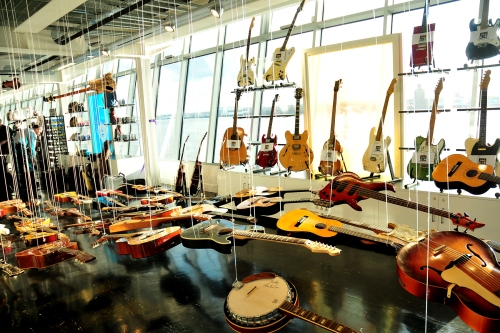 Hart said: “Guitars have been donated from all over the world as well as by a number of local artists and school children who have played a big part in getting this off the ground.

“It’s been a very hard year, but what a journey it’s been too.  It turned into a real community achievement, and I’ve made some amazing friends on the way to the Soundwave’s destination.”

The art installation is the product of a year of “following a dream”, building interest and finding a way to mark the half-century since the sound was born.

The Merseybeat was seen as England’s answer to 1950s Amercian music, but played with more energy and intensity. Other guitars of note

included in the wave was a white Fender played by Alex Turner of the Arctic Monkeys and another used by Status Quo.  The value of these guitars mean they’re on short-term loan from their home, The Cavern.

It wasn’t just about using other people’s pride and joys though. Bill included his prized, limited edition Fender Telecaster, which he bought to celebrate his 50th birthday. 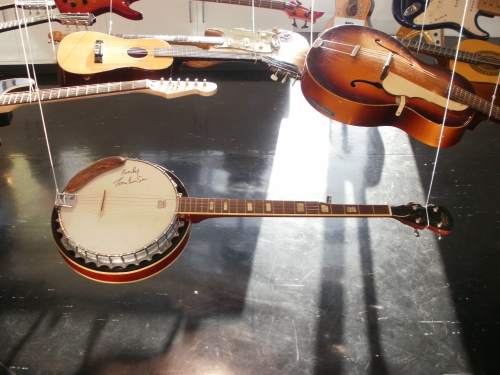 Guitar donations were made from a host of Liverpool musicians, school children and even actor-turned-politician Ricky Tomlinson, who donated one of his beloved banjos.

Ken Shalliker played with Merseybeat band The Kingsize Taylor and the Dominos, who some say created the famous Merseyside sound. He designed and built a mandolin for the exhibition.

Ken said: “I remember playing all those years ago, especially before The Beatles took off… we’d be playing every night around the city.  A lot of people think The Beatles created the Merseybeat, but in actual fact it was the other way around.

“I was already making the mandolin when I heard about the Wave.  It already looked a little bit like a wave so I thought this has to be the sound wave mandolin, so I phoned Bill up and got involved… I want it back though, eventually,” jokes Ken.

Hart says that all that is left to do is wait for a reaction to his dream before deciding where the wave will break next.  Entry is free and will be in the Mersey Ferry Terminal building until 7 May, 2010.

Mersey Sound Wave to be launched this Thursday! 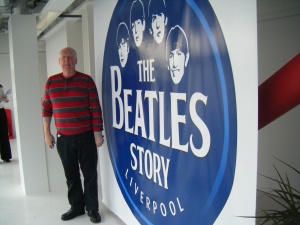 The Mersey Sound Wave will go on display at the Beatles Story’s Fab 4 Store at Liverpool’s Pier Head on Thursday, 1 April 2010 @ 5pm.

Up to 100 guitars that have all been played at the world famous Cavern Club will be hung to create a ‘floating’ effect, depicting a simple and gently flowing River Mersey wave. 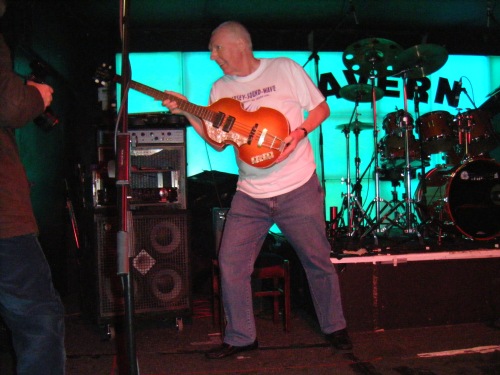 Although some famous guitars will play a limited part in the installation, the majority come from the local area. This Merseyside based community project is the brainchild of local musician Bill Hart who wants to celebrate and commemorate the region’s world wide musical fame and influence.

Everyone from local school children to ex-Royle Family star Ricky Tomlinson, who has also lent his famous banjo to the exhibition, have added their support to the project.

Hart said: “This project draws on the region’s incredible musical legacy of the past fifty years. We’ve had an incredible response to this project.

“Guitars have been donated from all over the world as well as by a number of local artists and school children who have played a big part in getting this off the ground.”

As well as the unveiling of this fantastic exhibition, the launch night will include performances from local children from the Beacon CE Primary School, girl group The Cocabelles, the Dominoes and Bill Hart’s own band Something Catchy who will be performing their new theme tunes: ‘Mersey Sound Wave’ and ‘Making Waves’. A charity compilation MSW Album will also be released, commemorating the day.

The Mersey Sound Wave will run at the Beatles Story’s Fab4 Store at Pier Head from Good Friday 2 April – Thursday 6 May 2010.

The exhibition is open from 9am until 7pm and is free to visit.

All press are welcome to attend this launch event on Thursday, 1 April 2010 @ 5pm

MSW at the The Beatles Story, Pier Head

Bill Hart paid a visit to The Beatles Story shop at Liverpool’s Pier Head as the anticipation for the arrival of the Mersey Sound Wave exhibit grows.

After months of searching, the fantastic exhibit of guitars that have all been played at the famous Cavern Club will go on display at the store, located rather aptly on the banks of river Mersey. 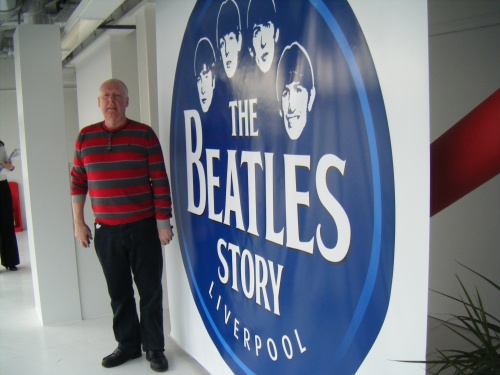 ‘Something Catchy’ and the Domino ‘Effect’ bands have been busy in the studio lately, recording the Mersey Sound Wave Album…

The Cocabelles join the MSW project and surf the ‘Wave’. 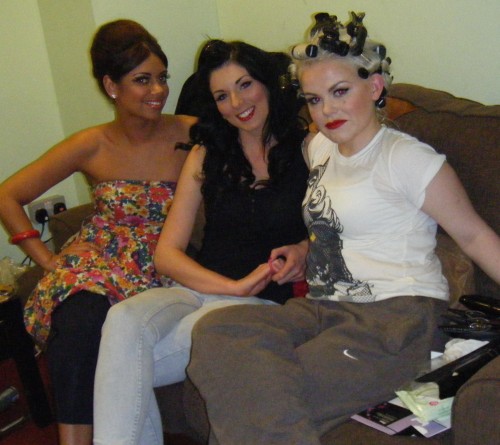 Karina, Kelly & Carina are in rehearsal to record a song entitled ‘Mersey Sound’.

Specially written by Hart/Carney the song will feature on the forthcoming Mersey Sound Wave CD due for release on Good Friday 2 April 2010.

In addition to the Cocabelles, the CD will contain tracks from the Merseyside legends The Dominoes, The Wavers with The ‘BeaCles’ and ‘Something Catchy’ Party Band.

A run of 100 Special Edtion signed copies are to be made with donations made to local yet-to-be-named charities. Details released soon.

Tagged Mersey Sound Wave, the beacles, The Beatles, The Cavern Club, The Cocabelles, The Dominoes, The Wavers 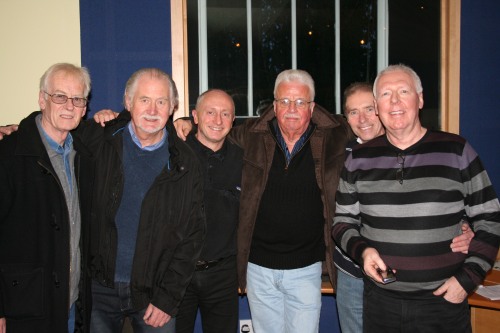 Jack Carney, Bill Hart & Alan Turner pose for a pic in the Shireshead Studio after recording the track ‘Go With The Flow’ for the Mersey~Sound~Wave CD.

Bassman Ken with MSW Guitar No9 Red/Black 1959 Framus Bass: Band: Kingsize Taylor & The Dominoes: Chris Rimmer Band. Ken is the designer and maker of the Spirit Of The Wave guitar. 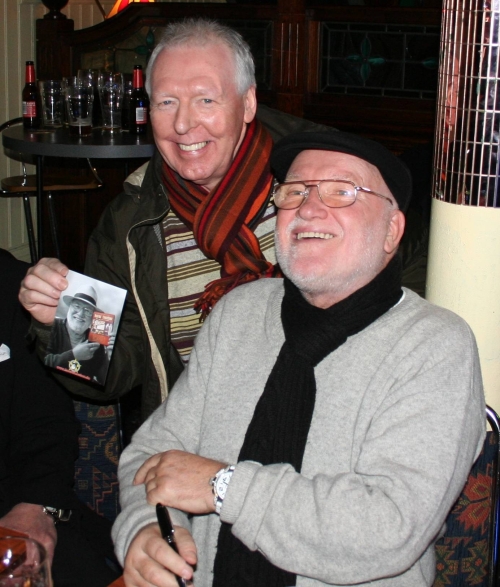 Bill Hart with Horst Fascher in Liverpool promoting the new book of his life as the Beatles ‘minder’ in 60’s Hamburg. The pair discussed the possiblity of taking the Mersey~Sound~Wave to Germany after it’s showing in Liverpool.

The ‘Spirit of the Wave’ takes shape

Here is another tantalising glimpse of the ‘Spirit of the Wave’, the signature guitar for the Mersey Sound Wave project.

Stay tuned to this site for more exciting info about the Mersey Sound Wave soon.

Tagged Mersey Sound Wave, Spirit of the Wave, The Beatles

The Mersey Sound Wave – A Tribute to Merseysound: 50 Years On
Blog at WordPress.com.